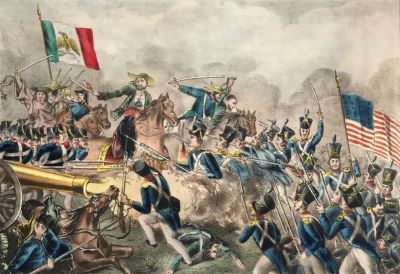 It won’t shock any of you, beloved readers, when I say that most of what you learn in modern history books is a lie.

Mind you there isn’t a lot that is accurate in the old one either.

In the old history books, the Mexican War was kicked off when Santa Ana attacked the Alamo and massacred the brave defenders.  Now the dates were a little off for a smooth scan.  The Battle of the Alamo was in 1836 and the Mexican-American War didn’t start for another nine years but that was the general impression that was made in most grade schools back when America didn’t suck.

Willing Jingoism is a reliable indicator of a society’s overall health.

Which was clearly suffering by the the time I reached middle school when I was informed that my previous impressions were wrong and that America beat up  poor little Mexico and stole it’s lunch money because America was evil and greedy.

Actually the Mexican American War got it’s start in the 1490s.  Don’t worry, I’ll be brief.

When the Old World was setting things up in the New World, two colonization models quickly developed.  First was the Exploitation Colony.

In an Exploitation Colony, the crown would make a land grant to a noble family.  The family in question would then send a “second son” to oversee the new world plantation for five to ten years.  When his time was up he would then toss the keys to the place to a younger brother and high tail it back to Europe with pockets bulging and all sorts of wild stories to thrill court ladies with tales of the American outlands.

The problem is that these second (and third) sons had absolutely zero motivation to make any infrastructure improvements.  What do I care if I shit in my yard, if it ain’t gonna be my yard next year? In fact improvements made were likely to come out your own pockets.  If you want to give yourself a raise you don’t make investments in your plantation, you just start whipping a lot harder. This was the model for what would become Mexico with two big (in everyway) exceptions, Texas and California.

The Exploitation Colony model set up the socio-political culture for a country where peasants still (in places) line up and bow for the big car of the patron when it cruises by.  Where the guy in the new Ferrari  expects the guy in the broken down pickup truck to swerve into a ditch when he comes roaring up behind him.

This was supposed to be the model for English Colonies in America as well but we were saved by either an accident of history or Divine Providence (take your pick).  About the time when the first wave of English “second sons” were getting ready to hot foot it out of Virginia and head back to London to live lives of rich wastrels, they suddenly got told by their family patriarchs “Sit tight, don’t come home.  King Charles I, has lost the Civil War and we were as you know, backing the wrong pony in that race.  Stay there, we may in fact be joining you.”

Twelve years later, Charles II is now sitting on a restored throne and it was safe for these Second Sons to come home…but they didn’t.

A man in his late twenties can upstakes and start a new life easily enough, particularly if he has money in his pocket.  But a man in his late thirties (with an average life expectancy of 52 back then) not so much.  Their wives hated the idea for a start. They were ladies with status in the New World, losing all that status to their older sisters and when they were in their late thirties was an intolerable burden.  Besides these “second sons” were home now.  They had invested nearly twenty years of their lives and a lot sweat into building up the place.  People value the most what costs them the most and building up a plantation in Virginia had cost them a lot.

And then came the next group of losers from the English Civil War.  The Roundheads followed their fellow Puritans to New England, when their side was looking at some pretty brutal reprisals from a newly installed king, who wasn’t happy with the guys who had put his dad’s head on Traitor’s Gate.

This was the Farmer Colony and it was our model.  You came to the New World and you stayed here.

There was no going back to Europe.  These were men who weren’t going to take a shit in their own back yard because it was their yard forever.  They had plenty of motivation to build infrastructure and their own society. So they did.

The thing is that the Farmer Colony wasn’t limited to just the English.  The Spanish colonists in Texas and California were in the same boat.  In their case it was largely the remoteness of the geography that kept them chained to their lands but they weren’t going back home either.

When Mexico declared it’s independence from Spain in 1821, it was reasonably content to adopt a federal model like the gringos up north had done. After all there was no way to enforce central authority so why bother?

The telegraph and the steam engine changed all that.  Suddenly centrist control by an authority that was raised in a world where shaking down anyone who they could get their hands seemed like a great idea to Mexico City.  The Tejanos and Californians, were suddenly looking for a better deal than a non-stop mugging and they didn’t have to look far to get it.

The cultures of these Farmer Colonies were compatible.  It was easier to deal with a man who saw things the same way you did, even you didn’t speak the same language.  The stage was set for the Mexican-American War by the Spanish settlers who wanted out of Mexico’s culture of exploitation.

And that is the real problem we are facing today.  The size of the immigration wave we are facing makes assimilation impossible.  Even if they did want to assimilate they couldn’t.

And our political cultures are completely incompatible.

One thought on “Why Immigration Matters: Incompatible Cultures”